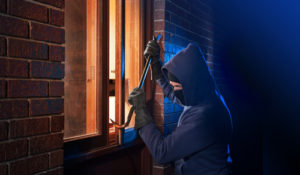 These crimes all share the common factor of taking property that doesn’t belong to the person, but there are major differences in the definitions and consequences of each crime. Keep reading to learn the differences between theft, robbery and burglary.

Broadly, theft describes the act of taking property away from someone else. A person’s actions may be considered either a felony or a misdemeanor based on several other factors like:

Robbery is defined by the FBI as a crime involving taking something of value from another person by force or a threat of force. Robbery suspects are accused of intentionally scaring their victims. Under New Jersey law, individuals will be guilty of this crime when they’ve used force, committed a first- or second-degree crime, threatened someone or inflicted bodily injury on someone while simultaneously committing the theft. If charged with second-degree robbery, then you could face up to $150,000 in fines and 5-10 years in jail. First-degree robbery charges could result in 10-20 years in jail.

Burglary is defined as the act of entering a structure unlawfully with the specific purpose of committing a theft or other felony. You could be charged with burglary for entering a secured area, remaining there or trespassing. Third-degree burglary charges carry sentences of up to three to five years and a fine up to $15,000. If you were found with a weapon during the burglary, then your charges will jump up to a second-degree crime. This could result in a sentence of up to ten years and a $150,000 fine.

Were you arrested or charged with theft in New Jersey? The consequences of a conviction could be severe, leaving you with a permanent criminal record and possibly even sending you to jail. That is why you need to speak with a qualified criminal defense attorney as soon as possible about your case. The attorneys at Rudnick, Addonizio, Pappa and Casazza have successfully represented clients charged with theft in Middletown, East Brunswick, Hazlet, and throughout New Jersey. Call 732-264-4400 or fill out the online contact form to schedule a consultation with a member of our legal team. We have an office conveniently located at 197 State Route 18 South, Suite 3000, East Brunswick, NJ 08816 and we also have offices in Hazlet, NJ.