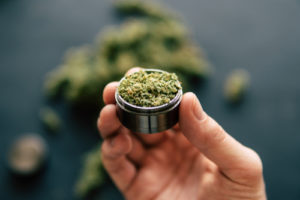 A famous New Jersey rapper and internet comedian, Tyriq Kimbrough, also known more popularly as Fatboy SSE, age 25, was arrested on Monday evening May 21st for possession of marijuana, in a small amount. Just before the arrest, he was pulled over by police officers for some minor traffic violations. When the officers ran his license through the system, they discovered that he had outstanding warrants, which gave them the right to search his vehicle. Kimbrough was accompanied by two other men in his car, who were his manager and a bodyguard. These men were also arrested. Allegedly, Kimbrough was also driving while his drivers’ license was suspended.

Not a Risk to Public Safety

The numbers of prisoners who have been arrested for non-violent drug offenses in the state of New Jersey is very high, and rates of recidivism are also high when offenders are sent to prison for this type of offense. As of 2012, as many of 25% of prison inmates were incarcerated for this type of crime. Since that time, efforts have been made to create more effective ways for the criminal justice system to deal with non-violent drug offenders, such as Drug Court. The New Jersey Drug Court program gives non-violent drug offenders like Fatboy SSE a chance to undergo drug rehabilitation rather than wind up in jail. This helps to address any addiction problems they may have and help them find the treatment they need to become more useful and happier members of the community.

Sentencing Too Heavy for Non-Violent Offenders

Despite the fact that nearly all non-violent drug offenders are not a real threat to public safety, many face severe penalties that involve years spent in prison or fines that they could never afford. This simply results in them being sent back into the system where they may become even worse offenders who graduate to violence or more dangerous drugs. Often, these penalties are political and tough sentences are given to these offenders simply to appease the public before an election year, but the public is often ignorant about how the criminal justice system truly works and about the harsh realities involved. It is much more beneficial to society in general for the criminal justice system to focus on the rehabilitation and treatment of non-violent drug offenders than it is to throw them in prison and toss away the key.

How a Drug Crimes Attorney Can Help

Have you been charged with a drug related offense in New Jersey? A drug crime conviction can carry with it heavy fines, jail time, and driver’s license suspension! That is why it is imperative that you speak with a qualified drug defense lawyer about your case. The lawyers at Rudnick, Addonizio, Pappa & Casazza PC represent clients charged with drug use, possession, production, distribution, and related offenses in Piscataway, New Brunswick, Woodbridge, and Freehold. Call 732-264-4400 or fill out our confidential contact form to schedule a consultation about your case. We have an office located at 25 Village Ct, Hazlet, NJ 07730, in addition to offices located in East Brunswick.